known as the ‘London Mosque’ isowned by the Ahmadiyya Muslim Jamaat and is London’s oldest mosque. 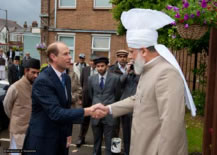 Prince Edward arrived at 11.20am and was greeted by a delegation of the Ahmadiyya Muslim Jamaat, led by its Khalifa,

Hadhrat Mirza Masroor Ahmad, who is the worldwide spiritual leader of the community.The Earl of Wessex was attending

Fazl Mosque, which has won numerous awards over the past few years. The Earl was also able to view a small exhibition

about the history of the mosque. The Earl was accompanied throughout the visit by Hadhrat Mirza Masroor Ahmad, who himself has a keen

interest and expertise in horticulture. The Earl also viewed the actual mosque and was keen to learn of its history.

the supervision of Hadhrat Mirza Masroor Ahmad over the past few years.

to the persecution faced by the Jamaat in Pakistan. At the conclusion the President of the Ahmadiyya Muslim Jamaat UK, Rafiq Hayat, invited the Earl of Wessex to visit the

Jamaat’s Baitul Futuh mosque in Morden at a later date. 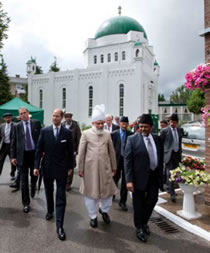 A number of other local dignitaries also attended including the Mayor of Wandsworth, Councillor Jane Cooper.